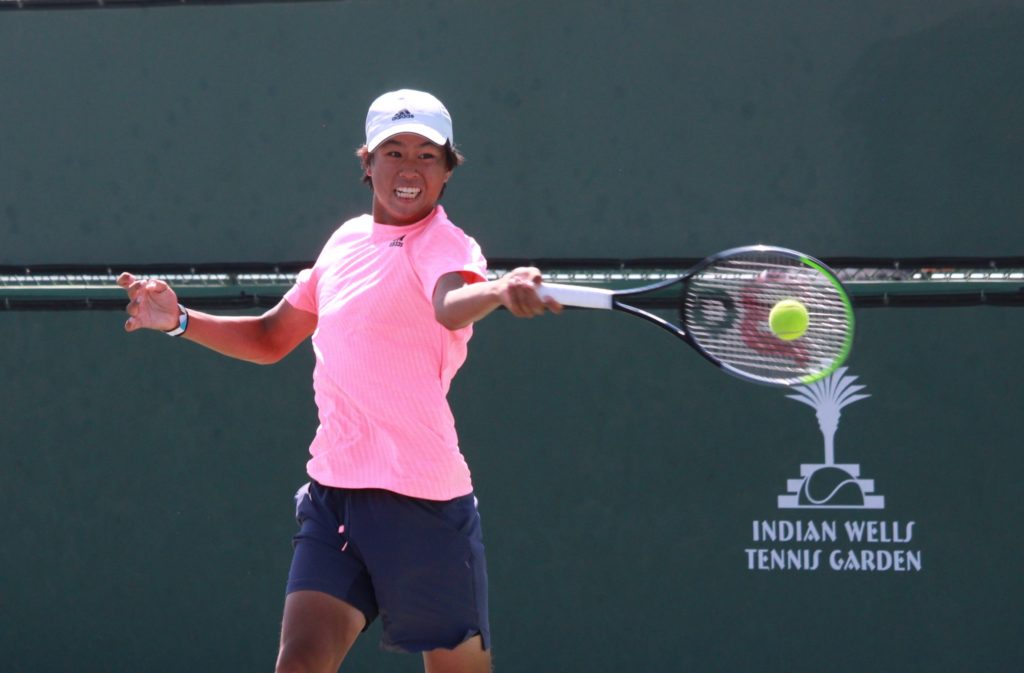 Southern California’s Learner Tien continued his hot winning streak with his seventh consecutive ITF boys’ singles win as the 16-year-old is attempting to win the junior edition of the Sunshine Double this week at the FILA Easter Bowl taking place at the Indian Wells Tennis Garden.

Since 2005, the ITF International Spring Junior Championships have preceded the FILA Easter Bowl, first in Carson and for the past two years at the Barnes Tennis Center in San Diego. Only twice since then has an American boy won both prestigious events back-to-back: current American ATP players Sam Querrey did so in 2005 and Marcos Giron in 2011.

“I’m trying not to think about it,” said the No. 15-seeded Tien of Irvine, Calif., who beat unseeded Noah Hernandez, 6-3, 6-3, Wednesday to advance to the Round of 16. “I’m trying to keep it as a separate thing, while still keeping the confidence of winning last week. But it has been a little bit in the back of my mind.”

Tien next faces a player he beat last week, No. 4-seed Michael Zheng, dropping just two games against a player ranked in the top 30 in the world ITF rankings. “It’ll be interesting meeting him again right after just playing him,” said Tien, who won the prestigious USTA Southern California Sectionals last June. “That was probably the best match I played last week. It’s a little different playing here compared to last week. Especially today. I didn’t feel it so much yesterday, but I felt the balls died really quick today and the courts played really slow, even slower than yesterday. But I feel like I’m adjusting fine so hopefully I should be could for tomorrow.”

Top-seeded Boys’ ITF player Ethan Quinn will join Tien in the third round as will No. 2 Nishesh Basavareddy, No. 7-seed Sebastian Gorzny, No. 8 Alex Michelsen, and unseeded Evan Wen and Kyle Kang, who Tien beat in the all-SoCal final last Sunday in San Diego.

Two weeks ago, the Indian Wells Tennis Garden hosted the ATP Masters 1000 BNP Paribas Open. Currently, the Miami Open is being contested with both back-to-back tournaments known as the Sunshine Double.

A day after defending champion and top-seeded Girls’ ITF player Liv Hovde was forced to withdraw because of an ailing back, No. 2, 3 and 4 seeds were all straight-set winners, including Qavia Lopez, Reese Brantmeirer and Alexis Blokhina.

In the Girls’ 16s singles, unseeded Claire Zhang of San Diego pulled off the huge upset in the Round of 16 as she eliminated top-seeded Stephanie Yakoff of Fort Lee, N.J., 6-4, 1-6, 6-4. Only three seeded players remain in the final eight, including Valerie Glozman (No. 5-9) from Bellevue, Wash., Pearlie Zhang (No. 5-9) from Piscataway N.J., and Aspen Schuman (No. 9-16) from Redwood City, Calif.  Unseeded players into the quarterfinals include Elena Mireles, Krisha Mahendran, Sydney Jarar and Alexis Nguyen.

In the Boys’ 16s singles, top-seeded Andrew Ena of Rego Park, N.Y., moved into the quarterfinals and will next face unseeded Parahar Bharadwaj of Charlotte, N.C., on Thursday. No. 3 Cyrus Mahjoob of Rockville, Md., also moved on and will meet unseeded William Semler from Portland, Ore.

In the Boys’ 14s singles semifinals, Colette Lewis of Zoo Tennis reported that Nathaniel Suh of Orange, Calif., began cramping serving for match at 5-3 and was forced to take a medical timeout. He was unable to finish falling to No. 3 seeded Evan Sharygin of Newburgh, Ind., 2-6, 6-2, 6-5 ret. In the other semi, Noah Johnston of Anderson, S.C., took it to top-seeded Ronit Karki of East Brunswick, N.J., 6-0, 6-2. The final will be streamed live at www.EasterBowl.com at 11 a.m.

Both of the Girls’ 12 singles semifinals also came down to a super tiebreaker as unseeded Yilin Chen of San Diego took out No. 5 Lyla Middleton of Rowe, N.M., 6-3, 2-6, 10-6. Chen will face unseeded Baotong Xu of Rolling Hill Estates, Calif., in the other semi. Xu, who was watched by her coach former five-time NCAA champion from USC Peter Smith, downed No. 3 Anjani Vickneswaran of Surprise, Ariz., 6-4, 1-6, 10-7. The Girls’ 12s final will take place at 11 a.m.