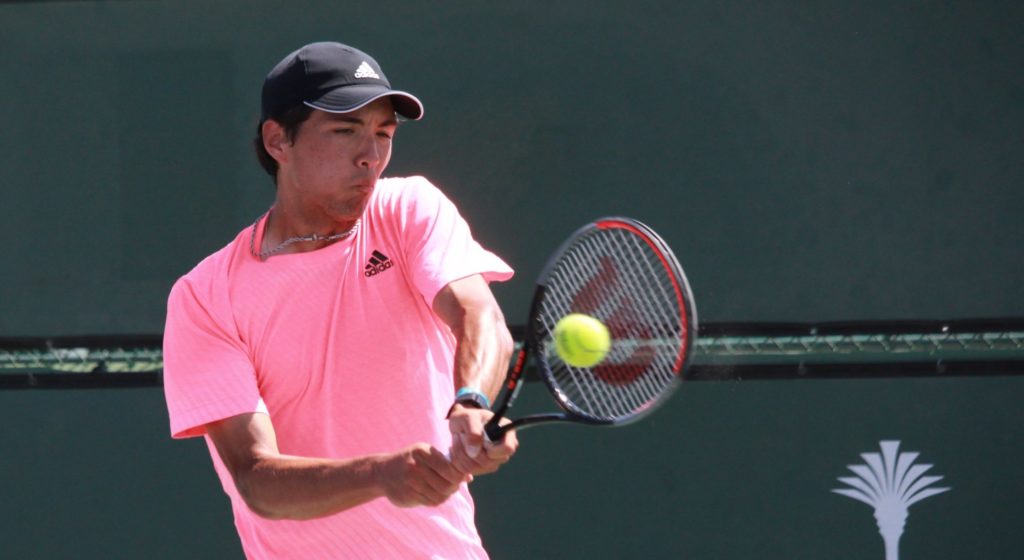 The younger juniors took center stage at the 54th FILA Easter Bowl as coveted USTA national gold, silver and bronze balls were handed out on the final day of the Boys’ and Girls’ 14s and 12s.

Noah Johnston of Anderson, S.C., can really start getting used to collecting the gold balls as he captured two on Thursday at the Indian Wells Tennis Garden. In the Boys’ 14s singles final, the No. 9 seeded Johnston beat No. 3 seeded Evan Sharygin of Newburgh, Ind., 6-4, 6-1.

It was the first national final for Johnston. “I’ve never even seen a gold ball,” said Johnston looking down at his prized possession. “I won a bronze in doubles at Winters, so to win gold in singles… It just feels so good.”

Johnston was watched by his coach and mother. Sophie Woorons was a Clemson All-American in singles and doubles who grew up in France. She is the tennis director at Brookstone Meadows Tennis in Anderson. “I played really well, and there are a lot of great players here,” said Johnston, who added tennis is truly a family affair as his father and grandfather also work with him on the courts.

“I just got through it,” said Johnston, who later in the day added the doubles gold ball alongside partner Gray Kelley. “I just tried to play smart, and I could tell [Sharygin] was getting tired because he had a 7-5 in the third yesterday.”

“I guess it was nerves that got to me in the first set,” said Okhtenberg of the slow start. “I just calmed down and started doing what I was taught. She was kind of getting mentally down.”

After the victory, Okhtenberg was informed that she would be named by the USTA to represent the United States in the first-ever Wimbledon 14U event at the All-England Club in June. Only players who have not turned 15 in 2022 are eligible to compete with the 13-year-old Okhtenberg turning 14 in June.

It was the first national ball of any kind for Okhtenberg, who trains at the Evert Tennis Academy in Boca Raton, Fla.

In the Boys’ 12s singles final, No. 5 seed Michael Antonius of Buffalo, N.Y., battled it out against No. 2 Vihaan Reddy of San Jose, Calif., ultimately claiming the title, 7-6 (4), 6-2, to capture his first USTA National gold ball.

“It was just a grind today and every game was long,” said Antonius, who later in the day added a silver ball to his new collection falling in the doubles final. “It feels great, it feels so good to win the Easter Bowl. I’m from Buffalo so there are not a lot of people I can train with. My coach [Marcus Fugate] actually won a gold ball at the Easter Bowl so I was like, ‘I have to do this for him.’ ”

After a quick check of the records, it was learned that Fugate had indeed won the Easter Bowl 18s doubles back in 2005.

In the Girls’ 12s final, two unseeded battled it out for the gold ball with 11-year-old Baotong Xu of Rolling Hill Estates, Calif., coming back to beat Yilin Chen of San Diego 4-6, 6-2, 10-6. It was the third straight match Xu won in a super tiebreaker.

“I’m feeling really excited right now, but I do know that all the hard work I put in got me here,” said Xu, who is coached by former USC men’s coach Peter Smith. “I wasn’t too surprised because I did do the work. All of the hard work paid off.”

“He wasn’t on his game,” said Wen, from Morristown, N.J., who calls Quinn a good friend but has never faced him in a match. “He’s definitely a little tired and I was like, ‘He has all the pressure. I know he has respect for me, so let’s see what I can do.’ ”

Wen has been back for a year following a year and a half on the sidelines with three herniated disks. He trains at the John McEnroe Tennis Academy in New York City. Asked if he’s ever hit with the legend, Wen said, “Yeah, all the time. It’s great. I mean, it’s a little frustrating at times because he’s still got his temper. But he’s definitely super fun to be around. We don’t practice moving in very much but John’s always like, ‘Get up there. Work on your serve.’ ”

Four unseeded girls joining the No. 2, 3, 4 and 8 seeds in the girls’ ITF quarterfinals led by No. 2 seeded Qavia Lopez, No. 3 Reese Brantmeirer and No. 4 Alexis Blokhina. No. 8 Ana Krug. The four unseeded players are Theadora Rabman, Iva Jovic, Shannon Lam, and Isabella Chhiv.

In the Girls’ 16s singles, a day after upsetting the top seed, unseeded Claire Zhang of San Diego continued her magical FILA Easter Bowl run with a straight-set win. She will face No. 5 Valerie Glozman from Bellevue, Wash., in one semifinal on Friday while unseeded Sydney Jarar from Wenham, Mass., will meet No. 9 Aspen Schuman from Redwood City, Calif.

In the Boys’ 16s singles, top-seeded Andrew Ena of Rego Park, N.Y., was upset by unseeded Parahar Bharadwaj of Charlotte, N.C., as Ena was forced to retire because of injury after losing the first set 6-2 and tied 1-1 in the second. No. 3 Cyrus Mahjoob of Rockville, Md., moved into Friday’s semifinals as he beat unseeded William Semler from Portland, Ore., 6-3, 6-2, and will next face Bharadwaj. The other semi pits unseeded William Manning of Raleigh, N.C., against No. 9 Zhengqing Ji from San Diego.

Draws, results and schedules for all divisions, including the boys’ and girls’ 18s,16s, 14s and 12s, can be found here.